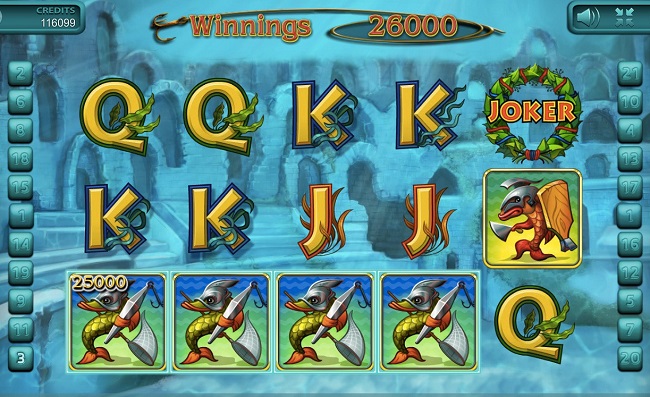 Modern entertainment sure does offer us variety: whether in the kitchen, stalking wildlife, or vicariously pressuring children into doing things for selfish reasons, there seems to be a television show dedicated to almost every human activity, and catering to every viewing need. But for spectacle, there is really still nothing to beat Ancient Rome. Live combat, men with suspiciously Australian accents against fellow men or ferocious beasts, in front of a bloodthirsty crowd: is there anything more calculated to appeal to our primal and callous natures?

Apparently so: Endorphina has adapted the idea of Gladiators, setting this game in a dappled blue underwater arena, redolent of a sunken city, but without the baying crowds, with a complement of armour clad fish battling it out for riches. Not completely illogical; after all, there was a class of gladiator called the retinarii, who were armed with fishnets and tridents, dedicated to Poseidon, the god of the sea. The music is of the mock heroic type, which seems to suit the idea of battle clad tropical fish rather well.

Actually, the lower value symbols are the common playing card figures, from 10 through to the Ace, but after these, there are a series of heavily armoured gladiator fish. The most valuable of these appears in a seahorse drawn chariot, armed with a fishing rod, and will snag a big multiplier of the triggering bet if you land three or more. The laurel wreath functions as the Wild symbol, and can substitute for all except the Scatter (as well as being a great garnish for seafood dishes). The Scatter itself depicts a Shark, firmly leashed, no doubt the equivalent of the lions so often featuring in the Roman arena: three or more of these sharks will trigger a Free Spins bonus, and reward you with up to 50 free games.

Gladiators is, like many titles here, a 21 line 5 reel slot, with the option of betting up to 5 credits per coin, and multiple coins per spin. The keys for selecting the lines and bet allocation are laid out clearly to the side and the bottom of the screen, and match the watery blue background. There is also the option of gambling any winnings produced by a combination on the reels, by pressing the Take a Risk button: this will require you to guess the value of a card, with a higher value than that chosen by the computer netting you a multiplier, but a lower value losing you the winnings.

Gladiators is an interesting slot, very different in feel from what one might expect from the title, but certainly entertaining. While the cartoon style illustrations do make it difficult to identify individual fish combatants, that is not really a problem, since the game itself will notify you of combinations, and there are plenty of opportunities to win big, particularly when free spins are triggered. When the chips are down, it seems you can’t go wrong with fish.

Previous post: [ Play Casino Online for Free or Real Money with Our Guide ]
Next post: [ An Introduction to Playing Online Slots and Other Games at Top Casinos in Norway ]