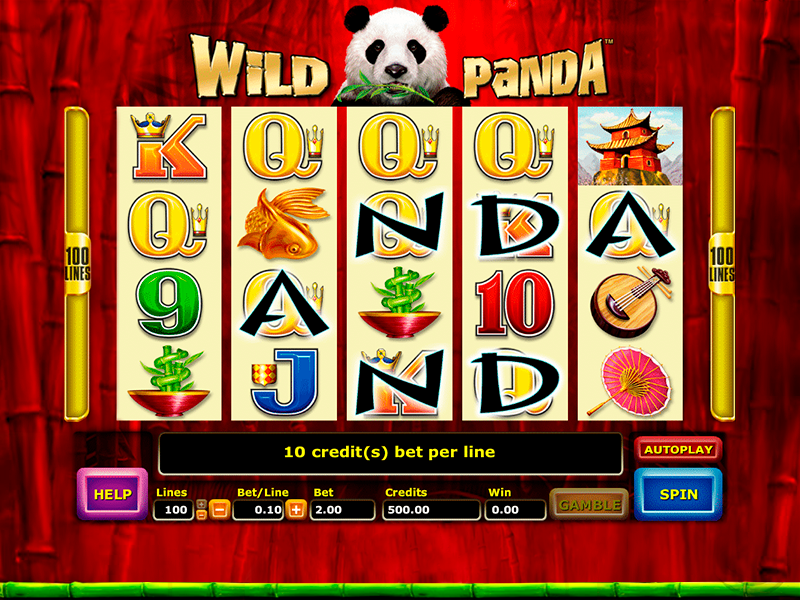 The Wild Panda Slot is a popular online video slot powered by Aristocrat Gaming. The game has Chinese/oriental theme with a focus on the majestic Panda bear. The backdrop to the slot is a view of a dense bamboo forest bathed in a pale red light. The reels themselves hang suspended in the centre of the screen with a cream background. The reels house an eclectic mix of oriental images with crisp graphics and smooth animation. The oriental music is soothing with the classic Aristocrat sound effects when a winning combination is achieved.

The Wild Panda slot has a total of 5 spinning reels and 100 paylines. Before each spin, players can set the number of paylines as well as the number of coins bet per line. The game also includes a full set of bonus features in the form of a Wild symbol, Scatter symbols and a free spin bonus round. On the reels, the highest paying symbols are all types of oriental images. The highest paying non-bonus symbol is the Chinese pagoda. This followed by the golden Chinese medallion which also plays the role of the scatter symbol. Next in line is the golden Koi fish followed by the umbrella and bamboo plant. Capping off the high paying symbols is the Chinese Ruan instrument and the lotus flower.

The lower paying symbols in the Wild Panda Slot include the standard playing card symbols from nine to king. The Scatter symbol is the golden medallion. This is the only symbol that can pay out in any position on the reels in both the base game and the free spins round. The Wild symbol in this game is the Panda bear. This symbol can be used to substitute for any of the other game symbols in order to form a winning combination. The only symbol that Wild cannot substitute for is the scatter symbol. The Panda Wild symbol also has the honour of being the highest paying symbol of the game. Finding all five across the reels will trigger the slot jackpot payout of 2000 coins on a standard coin bet.

In addition to the standard set of symbols, the Wild Panda Slot also includes the letters P.A.N.D.A. These appear in order on the five reels to make up the complete world. If players manage to land the complete word on screen during the base game, this will trigger the free spins bonus round. Making up the word Panda will reward players with 5 free spins. This may not sound like a lot but all the letters that made up the word Panda will turn into Wild symbols. This effectively adds another Five wild symbols to the reels making it much easier to form a winning combination.

In addition to the standard online slots setup and the bonus features, the Wild Panda slot also includes a few game features that will appeal to seasoned slot enthusiast. After any spin, players can change the number of paylines played as well as the totes betting range. The game also offers an autospin feature where players can set the game to automatically play a specific number of spins before stopping.