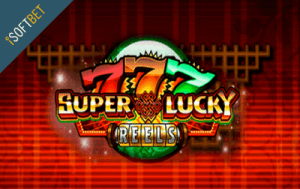 Super Lucky Reels is an online slot game styled after the classic mechanical fruit machines of yesteryear. It is developed and released by iSoftBet and it has a very unique reel setup. Players get 3 reels that they can spin to land winning combinations, but there are an additional 2 reels that can add more winning potential during game play on the right hand side of the reels. The green reel awards instant coin pay outs while the red reel adds win multipliers.

To activate these two extra Super Lucky Reels, players will need to wager 10 to 15 coins to activate the green reels and 15 coins total to activate the red reels. There are 5 pay lines to activate in the standard game. These pay lines can be activated with coins that range in value from 0.01 to 1. There is also a progressive jackpot that can be won with a certain combination of symbols.

To trigger a win on the 4th reel, you must first have a winning combination on the main reels, then land a symbol in the middle of reel 4. You can win 50 coins, 150 coins, 750 coins and 1000 coins with the corresponding plus symbols.

Winning the Progressive Jackpot in Super Lucky Reels is quite complex. Players must land the 3 Super Lucky Reels logos on an active pay line. They must also, when landing those symbols, match it up with a 1000 multiplier symbol on the fourth reel and a 10x multiplier symbol on the fifth reel. The Progressive jackpot increases as you play and make wagers.

The more coins you wager with in Super Lucky Reels, the higher the payout you get from the matching symbols. 1-8 coins will pay out the standard amounts, while 10 -15 coins pay out 10x as much. Playing with 10-15 coins will also activate the last two reels.