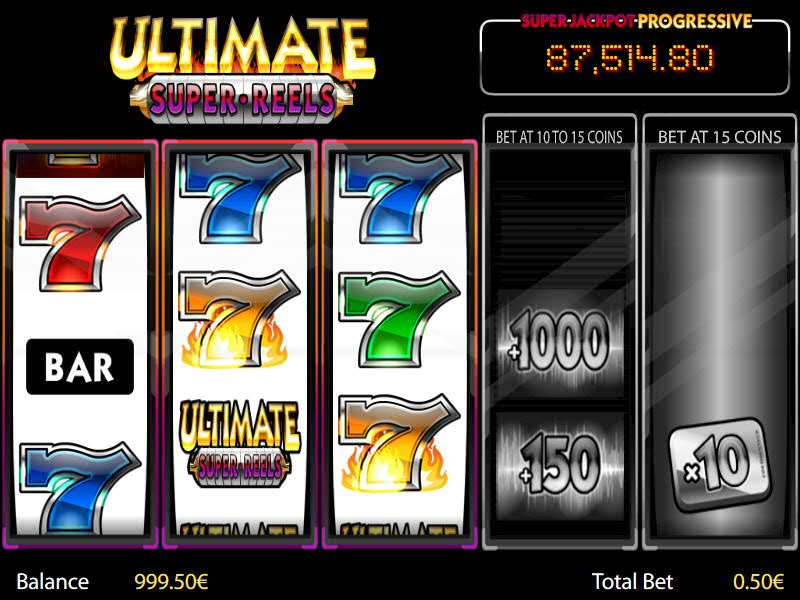 Ultimate Super Reels features 5 pay lines that players can activate. Wagers start at 0.01 per spin and can be raised up to 7.5 per spin. A Unique element in this game is the higher you wager the more unique bonus features you get access to. There are re-spins, win multipliers and instant cash awards to be won.

Other than the special reel bonuses, there are no wild or scatter symbols. All pay outs require players to line up at least three matching symbols on one of the 5 pay lines. There is an Auto spin option that can be activated to make the game play even easier.

There are three reels that spin and pay out winning amounts, but Ultimate Super Reels offers two additional reels to the right of the standard reels that become active the higher your wager is. If you wager between 10 and 15 coins, you will get access to the 4th reel.

This reel features a series of plus icons that award a set coin value depending on which icon lands in the middle of the reels during any winning combination on the first three reels. The possible coin pay outs are 50, 150, 750 or 1000 coins.

The fifth reel is activated when you wager 15 coins on each spin. Again, this bonus triggers if one of the symbols on this reel land in the middle of the reel during a winning combination on the three standard reels. The 4th reel does not need to land a winning symbol for the 5th reel to apply its win.

The on-reel symbols are a colourful selection of lucky 7s and less colourful Bar symbols. The symbols can award anywhere between 3 and 400 coins if you wager up to 9 coins , or 30-4000 coins if you wager 10 to 15 coins. All winning pay outs increase dramatically if you wager between 10 and 15 coins. Ultimate Super Reels is an online slot game by iSoftBet. This slot game features a very unique reel layout and bonuses system. This slots NZ game looks like a classic mechanical fruit machine slot, as there are three reels and iconic symbols that appear on the reels like the lucky 7’s and Bar symbols.

Previous post: [ OMG Kittens Slot Game Review ]
Next post: [ Get Lost In the Amazon Wild in an Online Slots Adventure ]