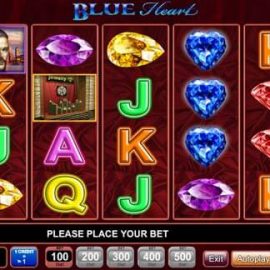 There has been a daring robbery of a jewellery store in New York City, and the famous Blue Heart diamond has been stolen. The Blue Heart slot game tells the story of the two thieves, and the player’s attempts to catch them and recover the jewels. If you can become a Bounty Hunter and capture the thieves, you will receive some big prizes and bonuses.

Blue Heart slot is probably one of the most generous games produced by EGT, or Euro Games Technology, and includes their famous Jackpot Cards feature, which appears in many of their slot games.

Blue Heart slot  provides five reels and four rows, with 100 pay lines. The game is set against the backdrop of New York City. The quest for tracking and catching the robbers begins with the player finding some letter and number clues, and these will pay up to 625 coins. There are plenty of jewel symbols, and these are where the real money is to be made. Three matching Sapphires or topaz jewels will pay 10 coins, four will earn 100 coins, and a line of five will pay the player 200 coins. The Emeralds are next in value, and the player will be awarded 25 coins for a line of three, 150 coins for four, and 350 coins for five Emeralds on the reels together.  A collection of rubies will award the player with 25 coins for three, and 150 for four matching rubies, and a full hand will award the player with a pretty good 400 coins reward.

If the player manages to catch either of the two robbers, there will be a great reward. There is a male robber and a beautiful female robber to catch, and either will pay 50 coins for three appearing on the reels, 200 coins for four and 600 coins for five.

Blue Heart slot offers a Wild Blue Diamond Bonus which may be awarded, and which may result in two different prizes being won. If the Diamonds make a winning pay line on their own you will win up to 5000 coins. Blue Diamonds, as the Wild symbol, can also substitute for all base game symbols to make multiple winning combinations. The Jewellery Cases are the Scatters, and any three of these appearing on reels 2, 3 or 4 will trigger ten free spins. This feature can also be retriggered during the initial bonus round.

The Jackpot Card bonus in Blue Heart slot, which is EGT’s popular trademark, can be awarded after any spin, and is awarded randomly regardless of whether your stake is big or small. You will be presented with twelve playing cards lying face down, and you can pick any three. If they are all the same suit you will receive the jackpot amount relevant to that suit.

You have the option of increasing your total stake in the online casino Gamble feature. Any prizes under 3500 coins may be gambled in the Gamble feature in the Blue Hearts slot. You then have to correctly guess the colour of a random playing card, and if you are correct your prize will be doubled.