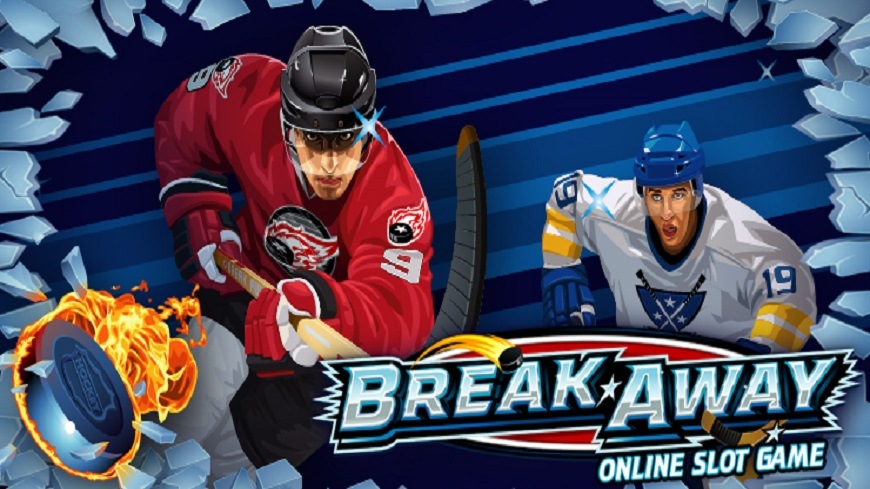 The Break Away online video slot is a Microgaming software creation with five reels, the 243 ways to win feature and a 5 000 coin jackpot prize. There is a sporty theme centring on ice hockey with fairly realistic style graphics, animations and sound effects. The online slot game features two types of wilds; scatters; a rolling reels feature and a free spins bonus round.

The regular paying online slot symbols include ice hockey players; the referee; a Zamboni; ice skates; the rink and more.  Winning combinations require three or more matching symbols to land in a row on a pay line. Animated videos are shown after winning combinations occur.

Playing the Break Away Video Slot

All of the main function buttons needed to play are found below the Break Away online slot reels. View pays is where the rules of the game and the pay table information is found. As all pay lines are active with the 243 ways to win feature, the bets are placed by selecting the coin denomination and the number of coins. A max bet button is however available to automatically bet the maximum amount. The spin button and the auto spin buttons are also below the reels with the auto play button allowing the reels to spin a set number of times.

The Break Away betting range is wide and begins at a denomination of 0.50 and ends with the maximum of 50.00 per spin. Up to 10 coins may be bet per spin with values of the coins bet ranging from 0.01 to 0.10. The red hockey player is the symbol that wins the 5 000 coin jackpot prize. This symbol needs to appear five times on any of the pay lines while the maximum bet is in play for this to happen.

Break Away online slot has two different wild features. Firstly, the online slot game’s logo is a stacked wild symbol, which will appear, stacked on reels three, four and five. There are a total of 40 of these symbols in the entire game and each one has the ability to replace any symbol when a winning combination is possible apart from the scatter symbol.

The second wild feature is the smashing wild which is a randomly appearing feature. At any point in the game ice hockey players smash into the second, third or fourth reels which will result in up to three of the smashed reels turning into wild reels.

Three, four or five of the hockey pucks also award 15, 20 or 25 free spins when the Break Away free spins bonus round is activated. During the free spins online casino NZD bonus round is when the rolling reels feature kicks in. Any winning combination will ice over and shatter making way for new symbols. This allows a possibility of multiple consecutive winning combinations which each come with multipliers of up to 10x.